In this video, I’ll give you a complete review of the Yamaha A-S701 stereo integrated amplifier. You’ll learn about its tech specs, some of its interesting features, and I’ll give you all the info you need to answer the question: should you buy one?

—
Hey, if you enjoyed this hi-fi related video, please SUBSCRIBE to my channel, HandyAndy Tech Tips! I normally do computer-related content (including tech news and how-tos), but, if enough people are interested in this video, then I might produce more videos on stereo components, including my bookshelf speakers!
—

– So, it’s a stereo integrated amplifier. That means that it provides amplification for mainly analogue sources, and it has no media streaming, touchscreen, or even AM/FM tuner.

– In fact, this harks back to the 1970s and 80s, both for its design and features. For one thing, there’s no display on the front of the unit, just a series of controls. Want Bluetooth? No way. Fancy connecting an iPhone or your PC via a USB connection? Nope.

– This is an audiophile product, and its specifications and features reflect that. Just its weight gives you an indication of how high-quality it is: it weighs 11.2kg.

– On the front of the device itself, you’ve got a power button and a headphone jack. However, this accepts 1/4 inch headphones, so you might need an adaptor if you want to use your 3.5mm cans.

– You’ve then got your speaker selector, and this ties in with the rear connections. It accepts two different pairs of speakers, or you can bi-wire a single pair.

– Continuing, we’ve got the bass and treble controls. These are a bit unusual because the bass control applies a +/-10dB boost/cut at 20Hz, and the treble control a similar range but at 20kHz. Usually,
these types of controls boost at 100Hz and 10kHz, respectively.

– Then there’s Yamaha’s famous continuous loudness control. This makes the sound more realistic when you’re listening at low volumes, because the human ear seems to pick up more midrange and less bass and treble in quiet sounds. It attentuates at 1kHz by 30dB.

– The input control gives you a choice of three line inputs, which are standard RCA. You also get optical and coaxial; you can input up to 192kHz / 24-bit via an integrated DAC. Then you’ve got an analog in for a CD player, input for a tuner, and also a phono input, which automatically applies the RIAA eq curve to vinyl records.

– CD DIRECT AMP gives a direct signal path from the CD input, bypassing the tone controls for a sound that’s cleaner and less degraded. PURE DIRECT does essentially the same thing, but it works for all inputs, not just CD.

– Gives 100W of power through both speakers with 8 ohm resistance at 0.019% total harmonic distortion (THD).

Amazon exclusive model includes power adapter and sustain pedal 88 fully weighted piano style keys simulate the feel of an acoustic piano and provide a quality playing experience Contains 10 different voices, including digitally sampled tones from re... (as of September 10, 2020 - More infoProduct prices and availability are accurate as of the date/time indicated and are subject to change. Any price and availability information displayed on [relevant Amazon Site(s), as applicable] at the time of purchase will apply to the purchase of this product.) 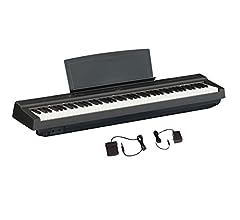 A fully weighted digital piano with 88 full sized piano style keys GHS weighted action is heavier in the low keys and lighter in the high keys, just like an acoustic piano The pure CF sound engine faithfully reproduces the tone of the acclaimed Yamah... (as of September 10, 2020 - More infoProduct prices and availability are accurate as of the date/time indicated and are subject to change. Any price and availability information displayed on [relevant Amazon Site(s), as applicable] at the time of purchase will apply to the purchase of this product.) 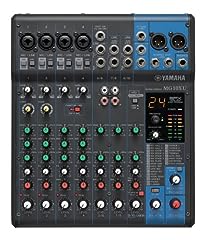 10 channel mixer with USB and SPX digital effects Featuring studio grade discrete class A D PRE amps with inverted Darlington circuit providing fat, natural sounding bass and smooth, soaring highs 3 band EQ and high pass filters give you maximum cont... (as of September 10, 2020 - More infoProduct prices and availability are accurate as of the date/time indicated and are subject to change. Any price and availability information displayed on [relevant Amazon Site(s), as applicable] at the time of purchase will apply to the purchase of this product.) 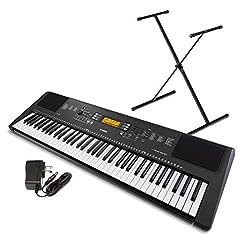 Bundle includes PSRE EW300 keyboard, PKBS1 keyboard stand and PA130 power supply A 76 key portable keyboard with 574 voices, 165 styles and 154 preset songs; Recording number of songs 5; Number of tracks 2; Data capacity approx; 10,000 notes Yamaha E... (as of September 10, 2020 - More infoProduct prices and availability are accurate as of the date/time indicated and are subject to change. Any price and availability information displayed on [relevant Amazon Site(s), as applicable] at the time of purchase will apply to the purchase of this product.)

does the unit have a tone defeat switch? To bypass the tone controls?

Can i connect this amplifier by rca(2xchinch)- mini jack 3.5 to computer? Thank you

just bought this its an absolute beast well worth the money, heaps of power to drive my inefficient speakers which really struggled with my 45wpc amplifier at high volumes.

what about 4 ohm speakers ?

11 kg is pretty normal for a descent amp

Hello Andy, thank you for the video. Had a further enquiry in relation to the Yamaha rn602. Considering it is lower in the power rating in comparison to the AS70, would the musical quality stay the same at lower volumes and only differentiate at higher volumes? Thanks

AS-701 or AS 1000 ? please, elaborate. I prefer more rafinament than power. This two models are comparable ?

No integrated amp that has a loudness knob and a remote is by any means “basic”.

can i run this with my presonus Studio 192 mobile audio interface? if so which input would i use to connect it? Thanks.

if you want to connect your tablet and phone you only need a chromecast audio dongle.

Do you think that amplifier may suit my JBL Studio 280 ?

That’s a USB port beside the digital inputs ?

Looked up the price and my exact words were “holy fuck!”

Is this amp good match for dynaudio DM 3/7

It doesn’t have any of those connectivity features you mentioned at the start because it’s an amplifier, not a receiver.

Hi Andy, thanks for the review, very informative. Can you share your thoughts on the RN-602 as well? It seems to swing the other way entirely when it comes to digital streaming and playback. I’m keen to understand how much worse (if at all) it performs musically as a result of this.

this costs nothing short of a beginner
audiophile.. T_T

did you really skip over a critical feature such as the auto power off? as to whether it also powers on with optical in?

Great video, bro. Could you tell me if this amp uses a toroidal or EI laminate Transformer???? Could you also review the Yamaha A-S801 Integrated Amplifier???

My first question is always – Price.

Oops, upon further research it appears they’re 8 ohm compatible. lol
Would you recommend pairing the 220s and this amp anyway?

hi handy good video likes it, plz tell me from which country does the ampl come from

I am between this and the Cambridge CXA80, any recommendations ?